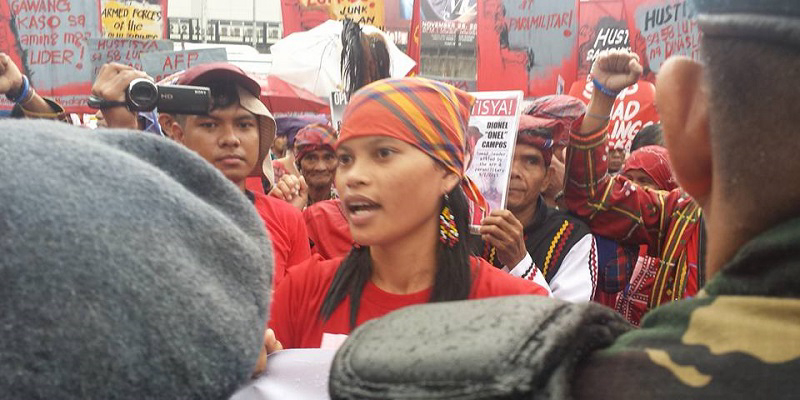 The recently-installed farmers inside the Lapanday-controlled banana plantation in Tagum City, Davao del Norte are now crying harassment from guards allegedly hired by the Lorenzo-owned company whose three facilities were attacked by the New People’s Army rebels last month.

The Unyon ng mga Manggagawa sa Agrikultura (UMA) claimed that, over the weekend, Lapanday guards have started fencing some of the 154-hectares area given to them by the Department of Agrarian Reform.

Nante Mantos of UMA said that three blocks of the Madaum Agrarian Reform Beneficiaries’s area consist of about 20 hectares were fenced off by Lapanday guards since Saturday evening.

MARBAI spokesperson Antonio Tuyac said that when they demanded the guards to leave, the guards would say, “You are not the ones who hired us. Our employers Lapanday ordered us to stay here.”

The 159 farmers were allotted with 145 hectares of land by the government thru the Comprehensive Agrarian Reform Program. But so far only 108 hectares have been made available by Lapanday as the remaining 37 hectares are still being contested.

On the same day of the installation, Lapanday Foods Corporation filed graft charges against Sec. Mariano before the Ombudsman.

“It is a desperate measure, as clearly, Lapanday is already isolated, they are seeking an ally with the Office of the Ombudsman, and we urge them, especially Ombudsman Carpio-Morales, not to allow the institution to be used as an instrument for the feudal interest of the Lorenzo family,” Casilao said in a press statement.

In a released statement, Lapanday maintains that it owns the fruits coming from the San Isidro area despite the reentry of former members of the cooperative it is in contract with.

The Company stressed that its contract with the Hijo Employees Agrarian Reform Beneficiaries Cooperative (HEARBCO-1) shall continue.

“The reentry of its former members into the farm does not modify the existing agreement where HEARBCO- 1 is obligated to deliver and sell the fruits from the whole plantation to Lapanday,” Lapanday stated.

Lapanday said that it shall take all necessary steps for its contract
with HEARBCO-1 to be strictly enforced and complied with. The company warned that it shall file criminal and civil cases against any person or entity who shall interfere with the agreement.

A frustrated murder complaint was filed against self-confessed Davao Death Squad member Edgar Matobato by one of his victims in[...]